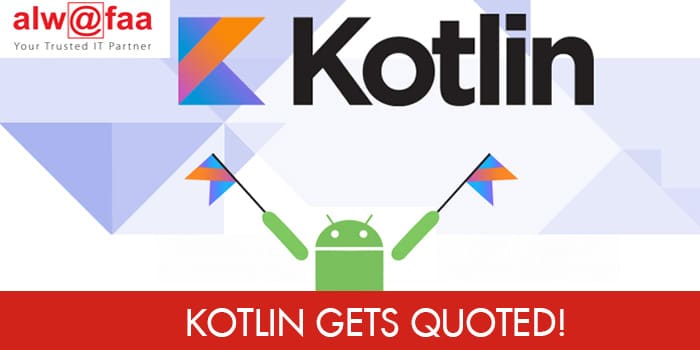 The brand new news for Mobile App developers is the launch of ‘Kotlin’! Wondering what it is? Kotlin is the official programming language for Android development. It is built by Jet Brains, the company behind tools like IntelliJ. It runs on the JVM (Java Virtual Machine) and it’s already possible to use Kotlin and many other JVM languages for Android development. What makes Kotlin special? Yes! There is an explanation for that as well. Kotlin is expressive, concise, extensible, powerful and interesting to read and write. It’s amazing features helps in making Android Apps healthy and performing by default.

Apart from that, Kotlin works side by side with Java and C++ on Android. As an added advantage you can keep your existing code and continue to use the various Android libraries and incrementally add Kotlin code to your projects. It is not a replacement for existing Java and C++ but only an additional language. Kotlin plugin can be downloaded for the Android studio. You can call into the Java language from Kotlin, and you can call into Kotlin from the Java language. In short it is a two-way process.

As per Google, Kotlin is an open sourced project under the Apache 2.0 license, as a luminously designed, mature language that can make Android development faster and with more fun. Kotlin tools will be encompassed with Android studio 3.0 by default, and Jet Brains and Google are assuring to support the language going onward. Kotlin as a language has a lot of similarities to Java in structure its object oriented and statistically typed and designed for similar problems Java solves. As referred as a clean slate, Kotlin adds a lot of nice features such as a much cleaner syntax, ideas from functional programming and other enhancements over Java. The news has received wide acceptance from the audience so far and everyone is waiting to try it out.

What you can read next

How to Choose the Best Web Hosting

TOP
Open chat
1
Hello
Welcome to Alwafaa Group
How Can We Help You?
Powered by